Heatwaves have swept across many parts of China this summer. The National Meteorological Center continued to issue a red alert for high temperatures, the most severe warning in China's four-tier color-coded weather warning system, on Monday, the 11th consecutive day.

*Facing shortages of water and power supplies in drought-affected regions, governments of all levels in China have stepped up efforts to combat drought and ensure normal production and people's livelihoods.

NANCHANG, Aug. 22 (Xinhua) -- Three kilometers of piping winds through the mountains, carrying water up to the hillside Dougang village. Nie Xiaolong, standing with his hands on his hips near the end of the pipe, felt relieved seeing water diverted into his paddies.

Not long ago, Nie, 42, was worried about the 200 hectares of crops he manages in Ruichang City, east China's Jiangxi Province due to a drought triggered by sustained hot weather and low precipitation lasting several weeks.

"I thought I might not be able to make it," said Nie. "Thanks to the local government's help to install water pumps and lay the pipes, my crops have been saved."

Heatwaves have swept across many parts of China this summer. China's National Meteorological Center continued to issue a red alert for high temperatures, the most severe warning in China's four-tier color-coded weather warning system, on Monday, the 11th consecutive day.

Facing shortages of water and power supplies in drought-affected regions, governments of all levels in China have stepped up efforts to combat drought and ensure normal production and people's livelihoods.

Jiangxi is home to Poyang Lake, China's largest freshwater lake. On Aug. 6, the lake officially entered this year's dry season, the earliest date since records started in 1951 and 69 days earlier than the average starting date between 2003 and 2021.

As of 8 a.m. Monday, the lake's water area totaled 575 square km, 2,475 square km less than that of previous years, according to the Jiangxi provincial water resources department.

Officials in drought-affected areas are fighting on the frontline day and night. Xu Yunping, head of Sanjiao Township in Yongxiu County, is one of them.

Although it is located adjacent to the river, a primary pumping irrigation station in Sanjiao Township was unable to work, because the water has receded to about 40 meters away from the pump's intake point. Xu decided to dig a water channel.

The 40-degree Celsius heat made it impossible for the excavator operators to work during the day, so they had no choice but to work through the night.

After 10 hours of working non-stop, a water channel of about 200 meters long and 4 meters wide came into service, ensuring irrigation for more than 3,300 hectares of rice fields.

Across Jiangxi, over 15,000 pumping stations and more than 308,000 sets of mobile drought-relief equipment have been put into use, along with other efforts, which have reduced around 3 billion yuan (about 440 million U.S. dollars) worth of grain loss.

According to the Ministry of Water Resources, since July, the drought has affected over 821,000 hectares of farmlands in several provincial-level regions including Sichuan, Chongqing, Hubei, Hunan, Jiangxi and Anhui.

Weather forecasts have indicated that heatwaves in some regions will last until late August, a crucial time for the growth of autumn grain, posing challenges to the country's autumn grain production, which makes up about 75 percent of China's annual grain output. 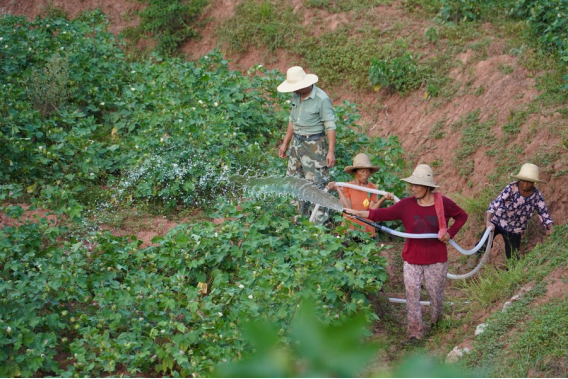 The Ministry of Agriculture and Rural Affairs has dispatched working groups and scientific and technological teams to major grain-producing and heatwave-affected provincial-level regions to provide guidance on drought relief.

The Ministry of Water Resources announced last week that reservoirs in the upper and middle reaches of the Yangtze River, especially the Three Gorges Reservoir in central China's Hubei Province, would further discharge 1.48 billion cubic meters of water into the lower reaches, starting Aug. 16. Previously, 5.3 billion cubic meters of water had already been discharged in August.

"For areas hit hard by natural disasters, we should seek fewer grain output losses, and for other areas, we must strive to ensure as rich a harvest as possible," said Minister of Agriculture and Rural Affairs Tang Renjian at a meeting earlier this month.

"The sprinkler truck is coming! Please get in line," community workers told the crowd who were waiting as the truck drove into Guangdong Village of Cili County in central China's Hunan Province.

Wu Yanglin, along with several villagers, stood on the roadside with water buckets in hand. "Water pressure is poor in my house as the reservoir in the village now has low water storage. We've been living without tap water for days," said Wu.

To ensure water supply for villagers, local emergency, water conservancy, fire, and other departments have mobilized sprinkler trucks and fire trucks to deliver water to residents.

"It's been a long time since I've experienced a drought of this scale. I will make the most of every drop of water I've got," said Wu after filling his bucket.

A total of 120 county-level areas in Hunan have reported a drought this summer, according to the provincial meteorological bureau.

Apart from the relief efforts provided by the water replenishment project on the Yangtze, some 210 million yuan of disaster relief funds have been allocated by the Ministry of Finance and the Ministry of Emergency Management to seven provincial-level regions for drought control, with a focus on solving domestic water shortages.

As a major producer of hydropower in China, the southwest province of Sichuan has been hit by excessive heat since July and seen its average precipitation 51 percent less than that of the same period in previous years, according to official data.

The province is making every effort to ensure every household has electricity, encouraging enterprises to avoid using electricity during peak hours. Some 25,000 power emergency repair personnel have been on standby 24 hours a day.

The coal storage of power plants in Sichuan has more than tripled compared with the same period of last year, preparing sufficient coal reserves and supply for power generation.